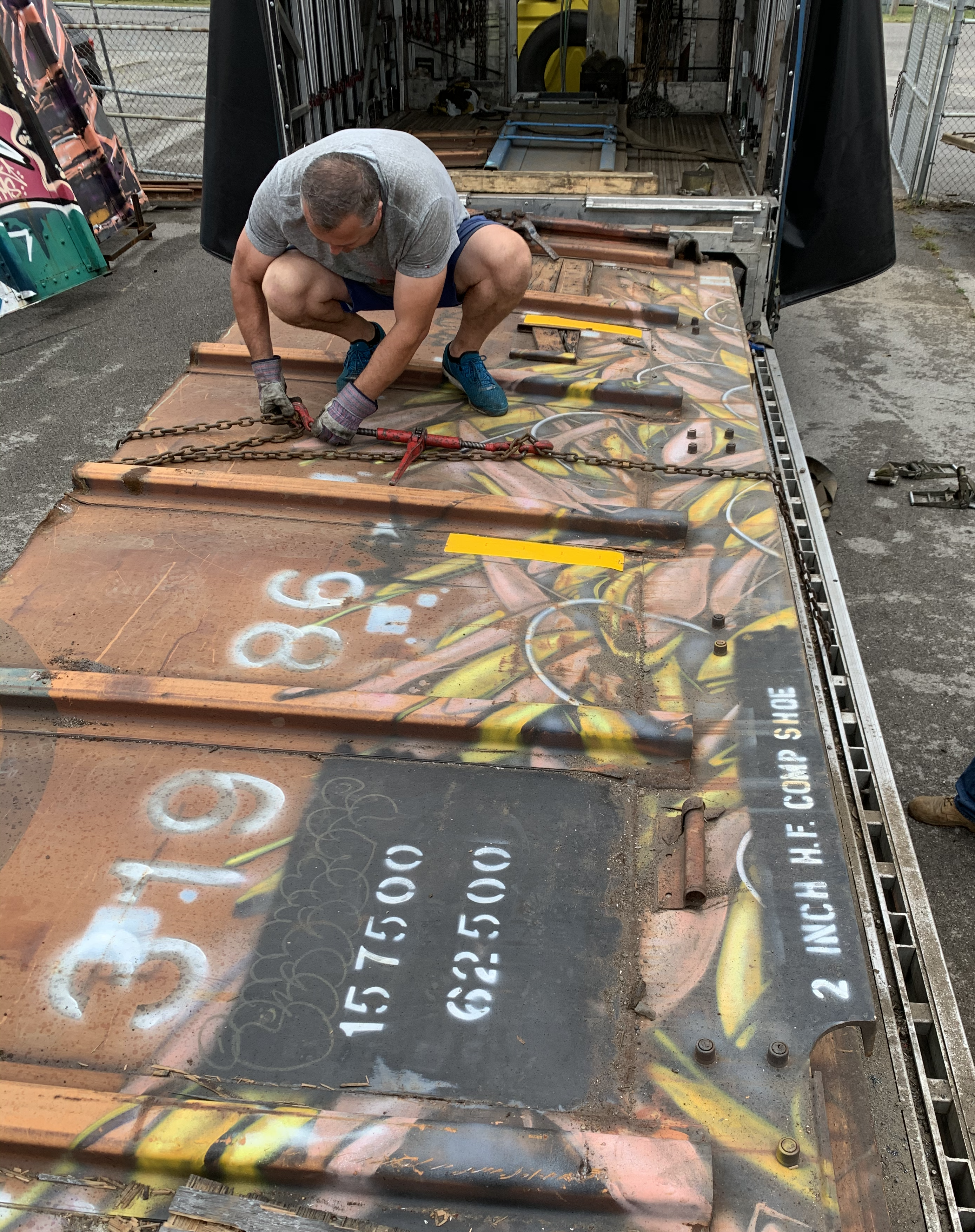 The railroad haphazardly curates the largest gallery of modern art on a daily basis in the form of graffiti-covered freight cars. We’re aiming to be a little more thoughtful in our approach to the preservation and presentation of the freight graffiti culture.

Railroads, those archaic bastions of the Industrial Age, constantly shuffle their collection according to a logistical puzzle based on destination, car type and weight rather than by artist, time period, or style. They give you no attribution or context, not even enough time to really appreciate the fluidity of the lines, the can control or the vision of the artist.

They offer you a split second to catch each unique gallery as it rolls past. Maybe you luck into a front row seat as the first car in line at a railroad crossing – watching as the brightly painted rusting hulks of steel crawl by.

But few of us experience that magical moment when an amazing piece stops for a precious moment right in front of us at the gates.

Most of us will never see it again.

Fans of the genre chase these pieces of aerosol art – it’s called benching. The term comes from the early days of train graffiti when young vandals would hit a train in the yard, and then grab a nearby bench to sit and wait for their handiwork to come rolling by.

Unless you are a graffiti artist or a railroad worker, chances are you’ve never been too close. Maybe within 20 feet at that crossing, but few people are actually right up on a train. And even if you are, you’re looking up at an odd angle trying to take it all in.

The Graff Museum allows the viewer to take in the work as never before (at least not legally). Patrons can see these massive pieces in all of their glory and begin to grasp the techniques and variations in style that give each of them their own unique character.

But, There are Pictures…

You can look at pictures. There are a lot of photos of graffiti covered rail cars.

But to see them in person, it’s hit or miss.

On a very small scale, we’re changing that.

Would you rather see a picture of a Rembrandt or see the actual piece itself?

Appreciating the can control and the way the artist compensated for the heavily contoured side of a railcar parallels to appreciating the brush strokes and thickness and textures of the paint on an oil masterpiece by a Dutch Master.

A picture may be worth a thousand words, but being there in person – priceless! 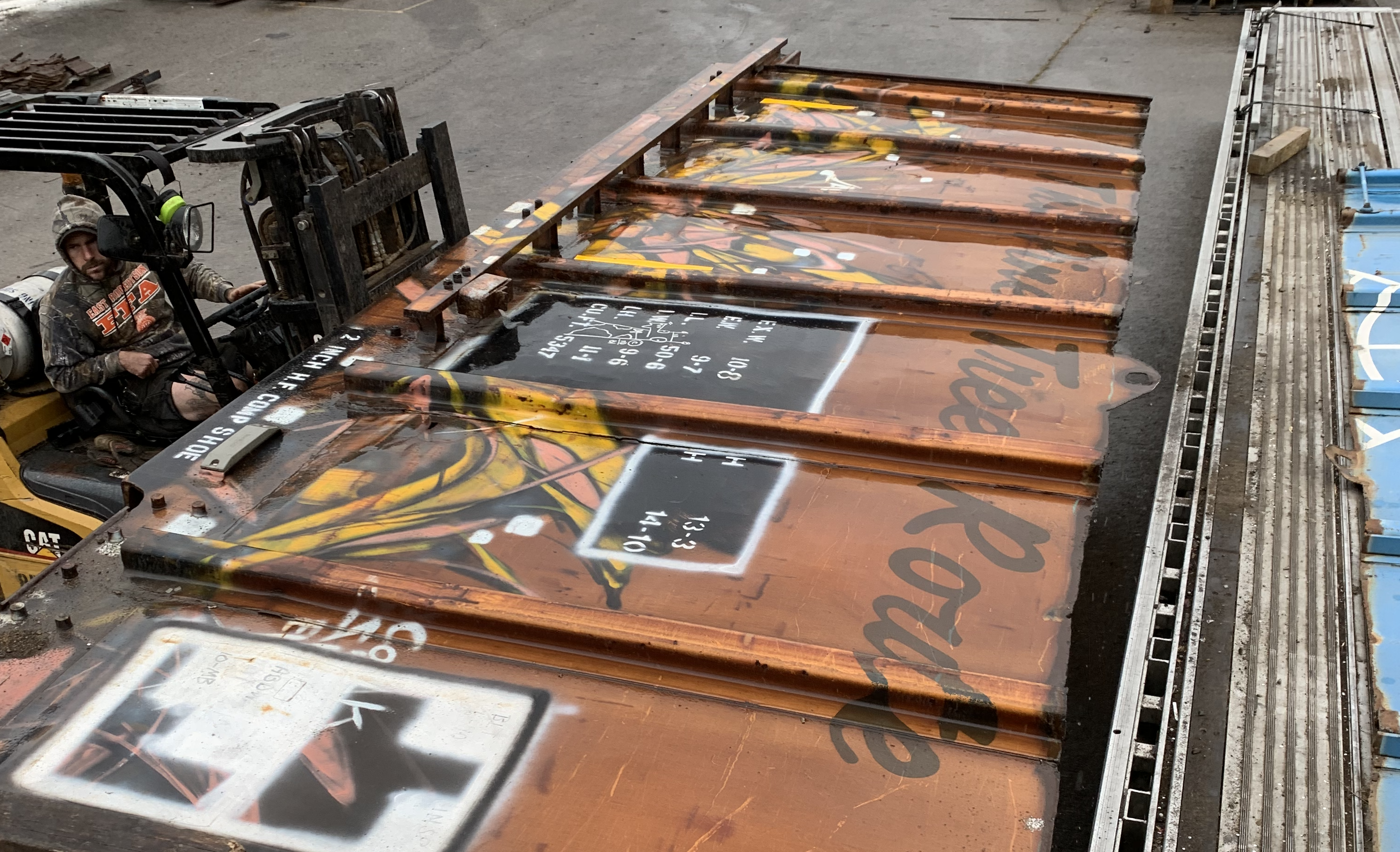 But aren’t these artists also doing other artwork that’s available?

Yes, you can purchase commissioned works from modern day freight graffiti artists like ICHABOD, or even originals from SEEN or “fine art” from so-called sell-outs (we take the view that these folks have made it) like RISK, REVOK, RETNA or KAWS.

However, nothing parallels the raw authenticity of aerosol sprayed on a rusting hulk of steel in a train yard. It possesses an edge that a well-lit air-conditioned studio can’t reproduce. It shows the true talent of the artist in being able to compensate for the highly textured ribbing and structural elements of a car while dodging the authorities and braving the elements perched atop an inverted 5-gallon bucket in the dark of night.

Trust us, they had none of those elements worked against them when they painted that canvas or colored in that postal sticker.

Graffiti represents the earliest art form known to man, and its latest iterations the most modern form.

Train graffiti originated in the United States in the 1980’s and migrated over to freight trains when bureaucrats took up the fight to buff commuter lines.

Graffiti traces its origins to the subway lines of New York and Philadelphia. CORNBREAD, SEEN, and TAKI 183 are revered among the earliest of the pioneers of what would become the first original art form born in America. The cars they hit in their heyday are gone – victims of an expensive and hard fought war at the hands of the bureaucrats and civil servants in the interest of cleaning up the image of the city.

The war on graffiti on the commuter lines moved to the freight yards – the less heavily monitored and more accessible yards adjacent to the increasingly heavily fortified commuter rail yards.

Some railcar owners buff their fleet of graffiti. They go to great lengths to keep their cars pristine, repainting their livery whenever required.

Others remain less concerned with the look and more interested in the functional and financial return from their fleet. Rather than pull a car from service, they opt for a quick cover up and reinstatement of important details such as reporting marks.

These blocked out interruptions look like a poorly executed version of a Soviet-era censorship, but it suffices to get the loaded freight car back on its way to generating revenue. For the tenured artist, it’s a known future edit of their work, while the more savvy learn to avoid the markings or reinstate the marks themselves to keep their pieces rolling. 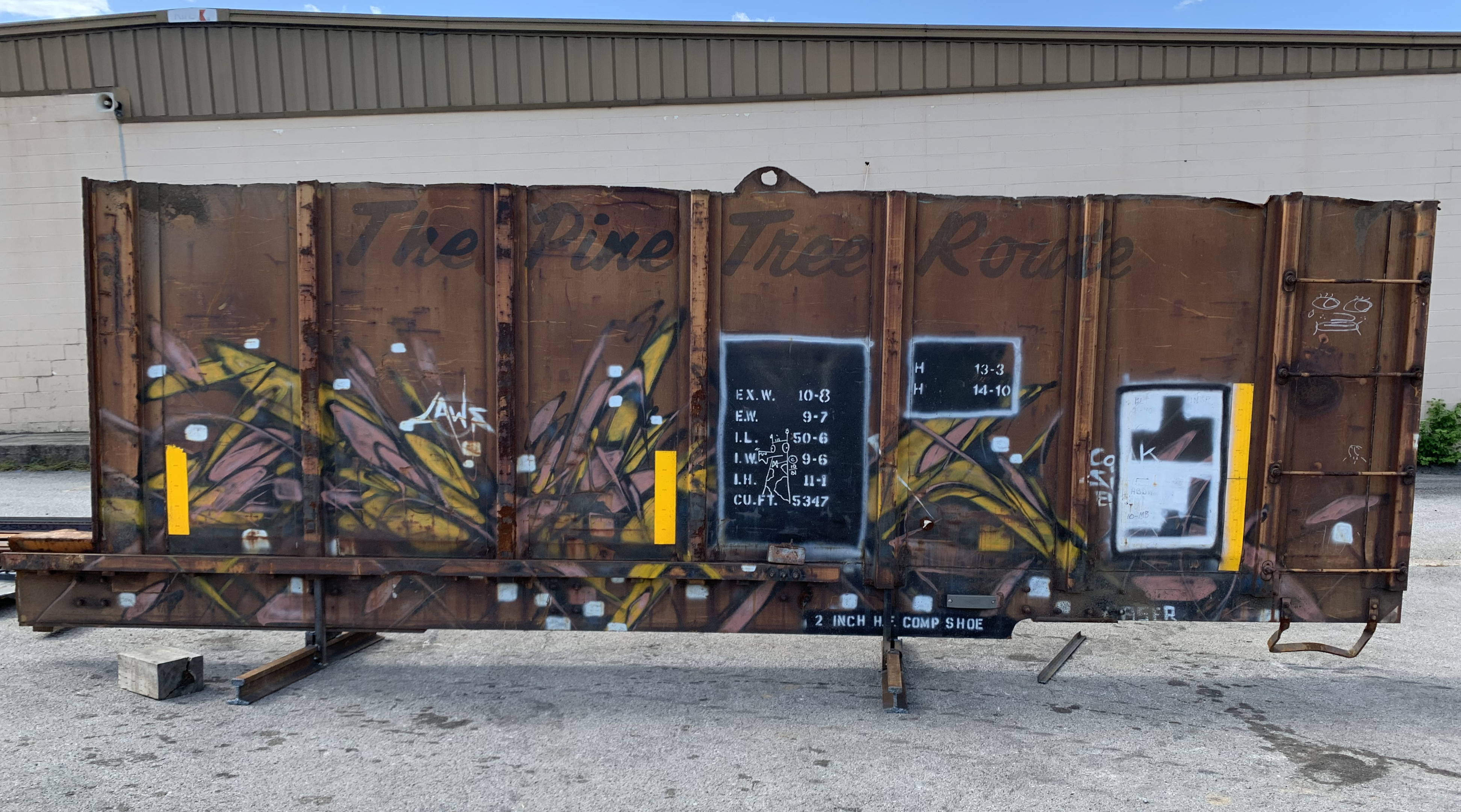 There is one means for eliminating graffiti from the rail lines.

Boxcars have a maximum life span of fifty years, though most will never reach that half-century mark. Both the American Association of Railroads and the Federal Railroad Administration have set that as the defining boundry. However, most cars age out before reaching that point. They become less efficient or require more maintenance such that they offer a poor return on investment comparable to newer cars.

The decline of railroading in general as a mode of transportation in favor of trucking also has reduced the number of boxcars. Combined with the rise of intermodal containers (like those used in shipping that can go by boat, by truck or by rail), these versatile means of transporting goods displaces much of what had been boxcar freight and further reduces the number of boxcars.

Graffiti is transient by its very nature.

We’re preserving a small part of it. Not necessarily the most important or most famous (aka infamous), but relevant pieces that reflect the culture.

Some of the artists we know. We try to reach out to those whose work we have the privilege of curating.

Some we don’t know. It’s the nature of the anonymity of the graffiti culture.

We select pieces from cars destined for scrap and/or designated as a source for parts.

In an early conversation with one vandal…erm, artist, we pointed out that we could probably get access to special cars if there were any that he felt were more important than others.

He had a problem with that.

He felt we would be accelerating the decline and curtailing the rolling life span of some of his pieces. If a car was rolling, he felt it would be wrong to stop it – it undermined the very essence of the culture.

Ironically, by preserving it, we could be giving it an even longer life span, but it went against the very basis of the culture. As such, we only select from cars designated as scrap.

That’s why it’s so important to us that we select works as they head into a scrap yard.

That makes this even harder. Once a car heads to a scrapper, the window to get our hands on it can be very short – days or even hours. We’ve missed out on some amazing work. 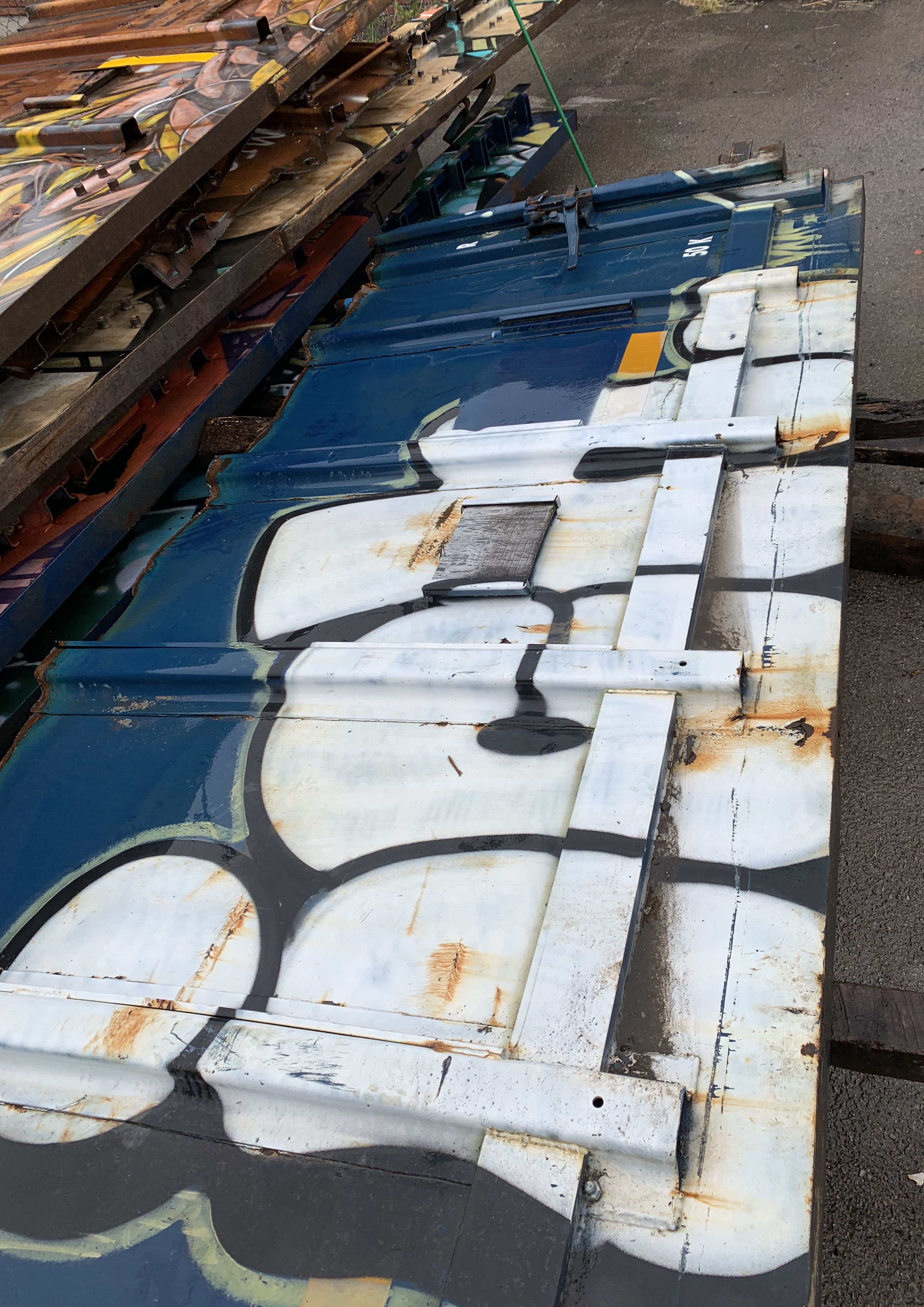 So the next time you’re sitting at a grade crossing waiting for that train to pass, put down your phone. Look up and enjoy seeing the latest gallery of American Modern Art curated by your friendly railroad.

Then plan on coming to see them up close and personal.

We’re in Nashville. Call or e-mail us to schedule a time to view the small collection we’ve begun to assemble.