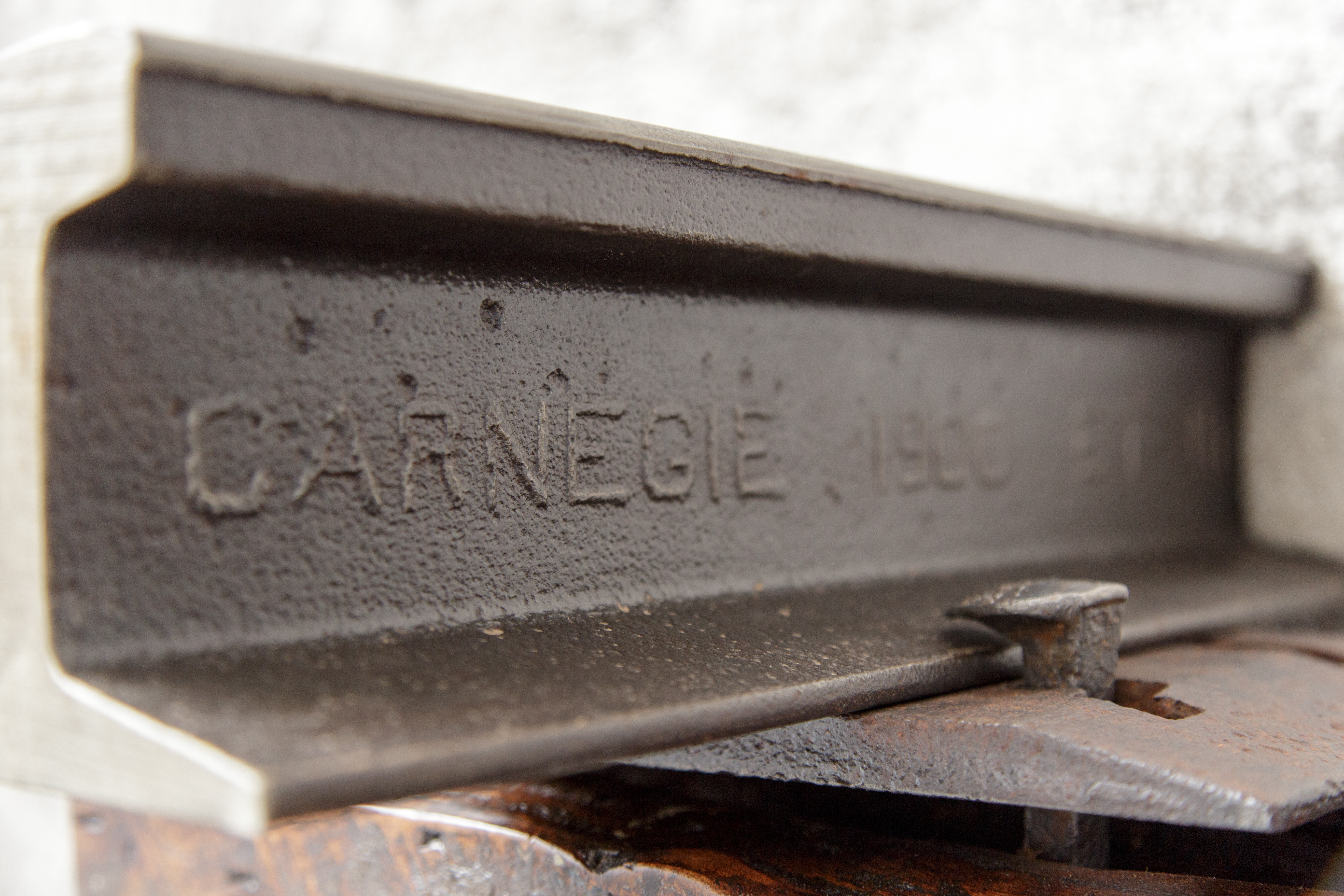 Our collection of furniture for home and office bears brands from Tennessee, Illinois, Maryland, Colorado, Lackawanna, Carnegie, and Canada-Algoma among a few others. Each brand on the web of the rail in these artifacts possesses a rich history that we preserve through the tables, desks, pool tables and other objects we craft.

A handful of older brands still produce steel today, but the founding names of the companies of the Industrial Age largely have gone by the wayside in the modern world.

Many of the original foundries continue on as part of larger corporate entities after mergers and acquisitions piloted by financiers like J.P. Morgan and John D. Rockefeller. Yet others have given over to new development like Tradepoint Atlantic in Maryland and portions of Lackawanna just south of Buffalo, New York. 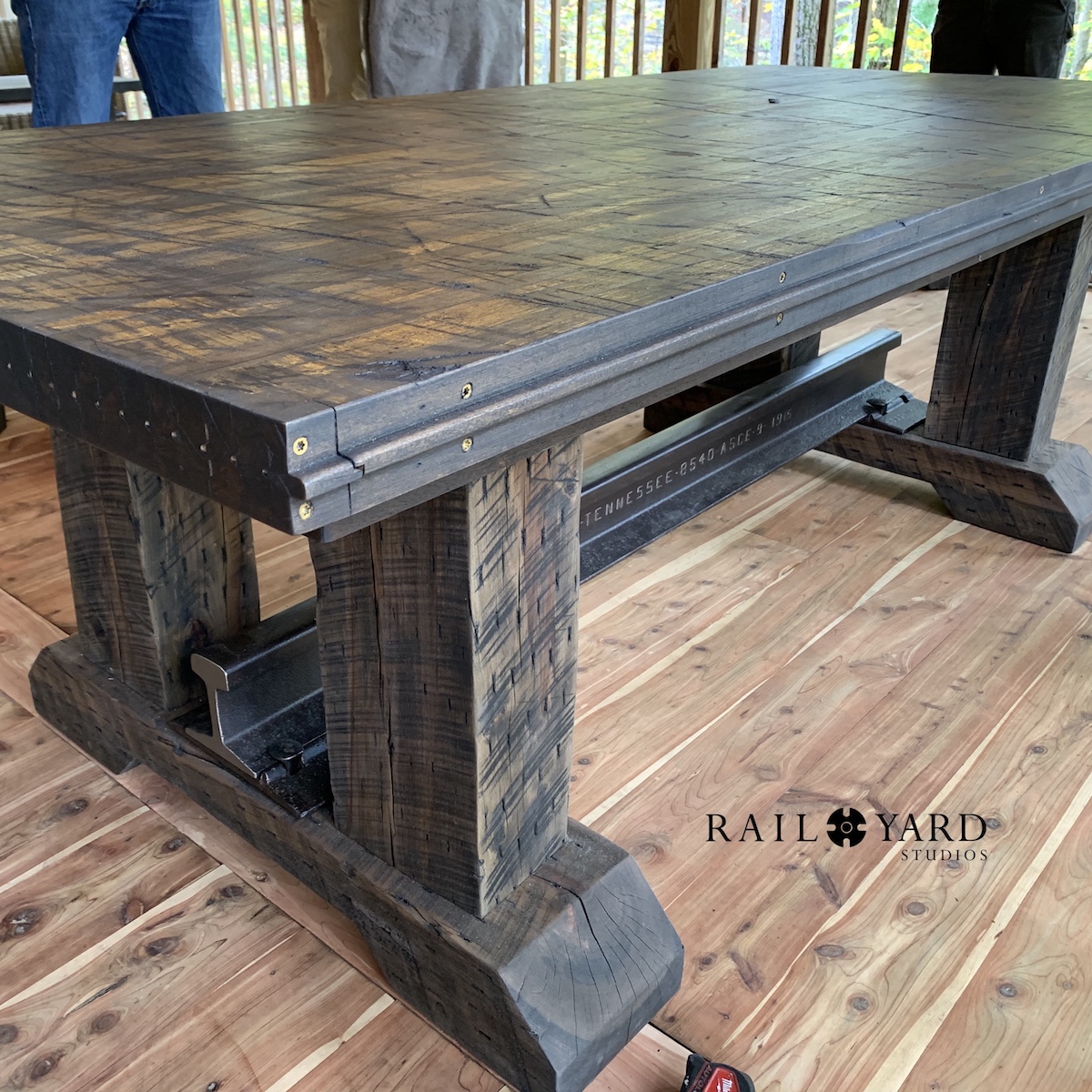 Tennessee Coal & Iron stands as one of the first foundries producing railroad steel. TENNESSEE-branded rail holds special meaning for Rail Yard Studios. Based as we are in Nashville, we take pride in seeing our home state name emblazoned on the web of many of the rails we use.

Olhausen Billiards partners with us to offer Rail Yard pool tables, shuffleboards, air hockey and foosball tables entirely made in the USA. To be precise, they are another local company, and the Tennessee-branded rails come standard in their Rail Yard line. For Olhausen products, the other brands are available by special order.

Ironically, Tennessee Coal & Iron Company (TCI) moved its operation in the 1800s to Birmingham, Alabama. The TENNESSEE brand persisted for an entire century from 1852 until 1952, the latter half after its acquisition in 1907 as part of U.S. Steel. 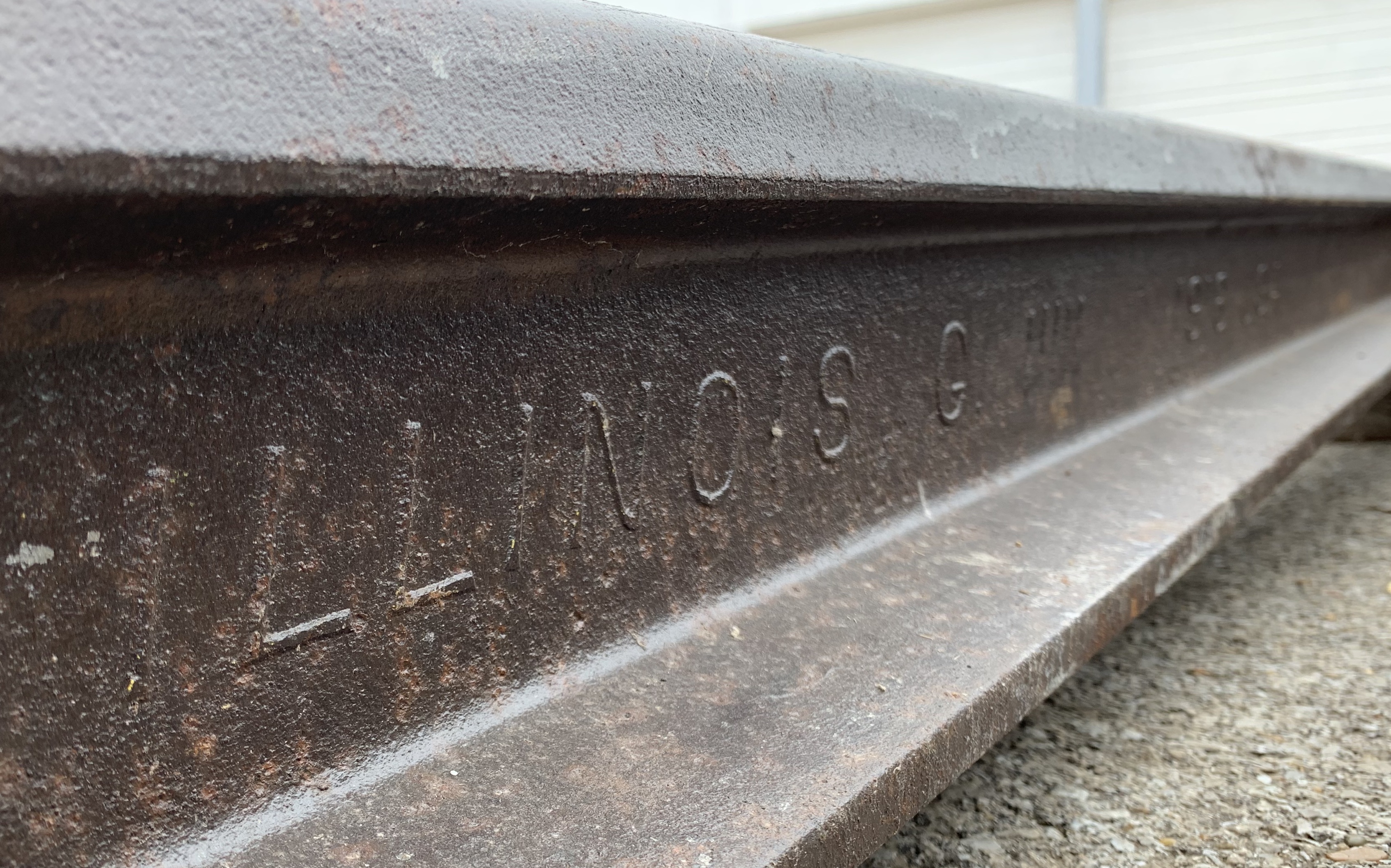 Illinois, and Chicago in particular, has a rich history in railroad. At one point, over half of all rail traffic went through the city's rail yards. Today, according to the American Association of Railroads, 25% of freight traffic and 46% of intermodal traffic goes through the city of Chicago. On top of that, it’s “L” – short for “Elevated” commuter line remains a hallmark feature of the Chicago urban landscape and an integral part of the city's architecture. 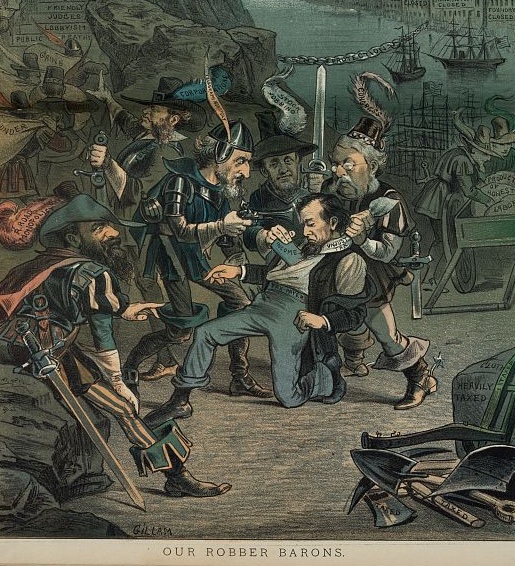 Andrew Carnegie built the Carnegie Steel Company while working with the Pennsylvania Railroad. The robber barons as a group would drive much of the Sherman Antitrust legislation that would curtail the heavy cronyism and collusion brought about by monopolistic businesses.

Andrew Carnegie’s reputation gets both positive and negative press. For one, he supported workers’ rights, but busted unions. He amassed a massive fortune, and then he spent the remainder of his life trying to give it away. Modern day entrepreneurs like Bill Gates and Warren Buffet have followed a similar path in regards to the fortunes they accumulated.

The railroad tycoon’s name became synonymous with the arts and education around the world. Carnegie Hall,Carnegie Mellon University, and the Carnegie Museum of Art. In addition, there exist 1,689 libraries around the U.S. alone bearing the Carnegie name or have him to thank for the foundational grant that saw them built.

Carnegie built a legacy that would last generations. The Carnegie Corporation, a non-profit founded by the railroad magnate, represents his philanthropy still today.

In 1901, legendary entrepreneur J.P. Morgan assembled the foundational pieces of what would become U.S. Steel when he acquired Carnegie Steel Company from railroad tycoon Andrew Carnegie for $492 million. Today that equates to more than $15 billion in 2021 dollars.

U.S. Steel ultimately would become the first company in the world to have a market cap of $1 billion dollars.

Colorado-branded rails have origins dating back to 1872 and the Denver & Rio Grande Railway (D&RG) before a merger in 1880 created Colorado Coal & Iron Company (CC&I). The company would become Colorado Fuel & Iron (CF&I) in 1892.

At one time, the largest private land owner in the state as well as the largest employer in Colorado, the company had a history of building an “Americanized” workforce of people from many different nationalities, yet its labor relations remained tense as with all the steel manufacturers.

By 1903, another robber baron, John D. Rockefeller along with Jay Gould’s heirs owned and controlled the company until the 1940s.

Since 2007, CF&I has operated as part of the Russian steel corporation EVRAZ. 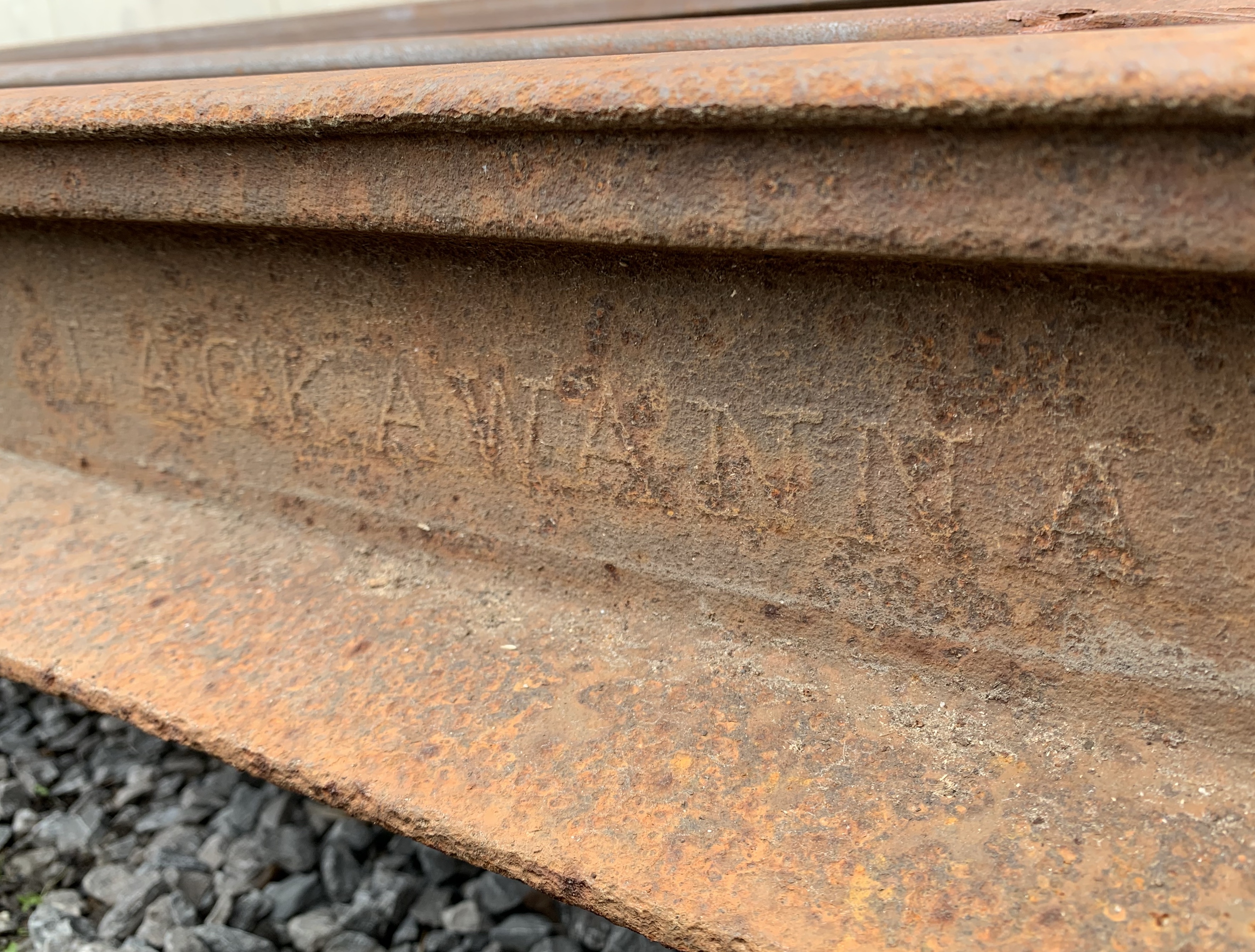 Originally based in Scranton, Pennsylvania, the Lackawanna plant relocated to  just south of Buffalo, New York in 1900. The company would grow at one point to become second in size to only the U.S. Steel trust.

The plant continued making steel until 1983 with the coke ovens remaining in use until 2001 when parent company Bethlehem Steel declared bankruptcy.

Lackawanna steel was declared a superfund site in 1988 by the Environmental Protection Agency (EPA) and subsequently declared brownfield site in 2003 under the Small Business Liability Relief & Brownfields Revitalization Act.

Today, a larger redevelopment of the old Lackawanna site is currently underway though some of the original plant remains abandoned displaying the architecture of a bygone era. 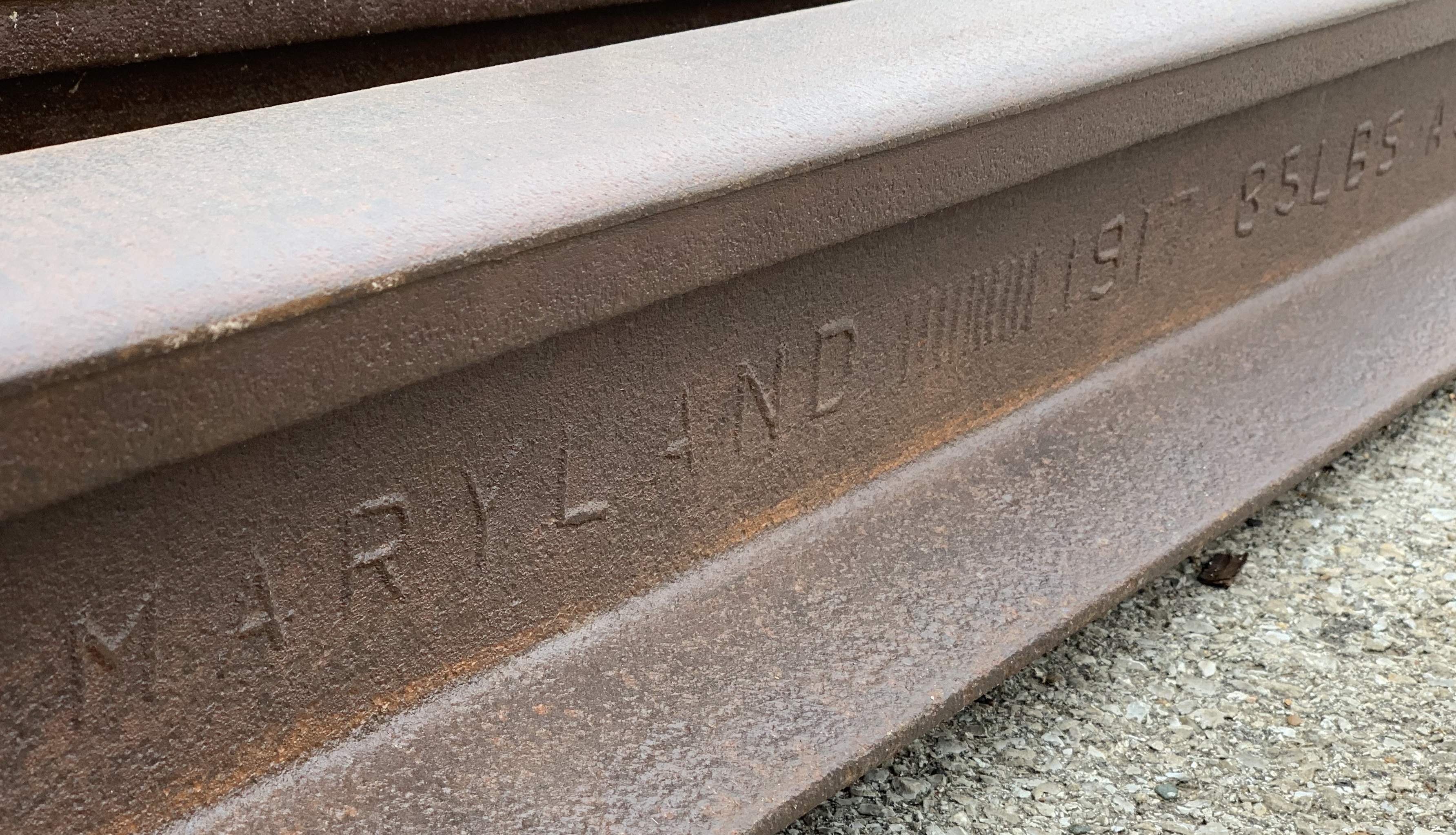 In 1889, the Maryland Steel Company began making steel at their Sparrows Point plant. Owned by parent company Pennsylvania Steel Company, the Sparrows Point foundry would become the largest steel mill in the world stretching for a length of 4 miles.

Purchased by Bethlehem Steel in 1916, the plant continued as part of that firm into the 21st century.

The Sparrows Point foundry changed hands several times following the bankruptcy of Bethlehem Steel in 2001, the mill continued to operate until its bankruptcy in May of 2012 ended operations after almost 125 years of steel making on the site.

Today it’s called Tradepoint Atlantic and Amazon, FedEx and Under Armour recently opened facilities office at site of the former foundry. The steel from the original plant was reclaimed and put through a recycling program. The area is a massive trade zone with a robust infrastructure that includes shipping with a deep-water port, highway access and of course, an existing rail infrastructure connecting to Norfolk Southern and CSX that ties it all back to its original industrial history. Dan Rodricks of the Baltimore Sun does a great job of capturing the new trade zone.

The first rails rolled out of the Sault Ste. Marie plant in Ontario, Canada known as Algoma in 1902. The company managed to endure through good times and bad going into bankruptcy during the Great Depression, but emerging from it under the same name. It faced reorganization again in the 1990s. Despite changes in ownership, the Algoma name persevered and still remains on the company as part of the holdings of Essar Corporation.