Skulls, bones and more skulls and bones – it’s a theme that runs through so much of ICHABOD’s graffiti work on the over 5,500 vandalized rail cars that bear his moniker.

Fashioned from the end of a coal hopper bearing the “ease up” label, this one is awesome! Bringing his quintessential motif to the forefront in a pile of skulls, the purple graffiti contrasts sharply against the neutral industrial paint of the panel upon which this piece is executed. The image of a bone heap in the foreground and another in the background lend this piece great depth and a high level of detail.

Throughout the process of creating this piece, we all referred to it as Nevada because of the shape. Later, we found the guillotine connotations evident in this work made a fitting name as well, so we kept both.

Signed ICHABOD 2021 in his inimitable hand-style on the reverse.

Shipping included in pricing in the US.

Installation services available, but not included in pricing. 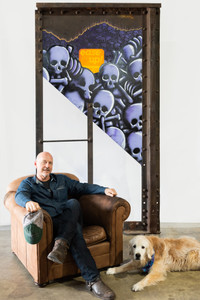 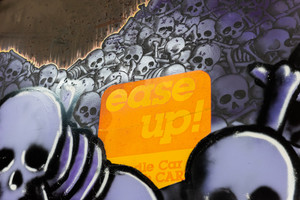