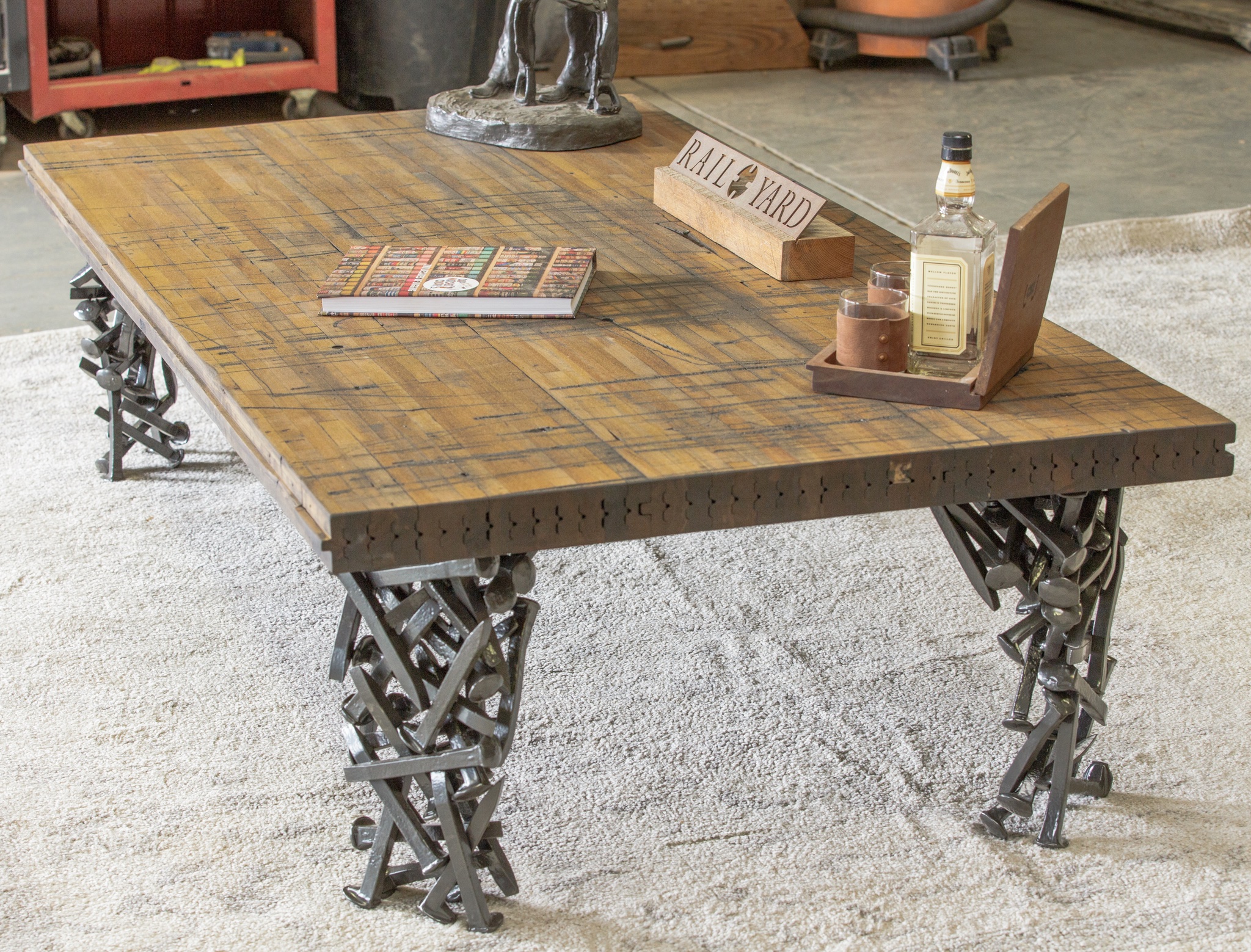 We strive to keep every detail of our furniture as close to pure railroad using traditional railroading techniques whenever possible. That means using spikes like our railroad contracting business uses in our coffee tables, desks, pool tables and other items in our furniture collection.

We also look to be environmentally responsible, so we incorporate reclaimed materials in our furniture. That means each piece has its own unique character, like how we brought spikes together in more unique, creative fashions for the Scrapyard Coffee Table or the OTM Wall Sculpture.

At Rail Yard Studios, our unending curiosity about what we can learn from history drives our creative side. We build our desks as a means of preserving and honoring where we come from as railroaders to promote impactful products and services for the benefit of our shared community and industry.

What’s Holding it All Together? 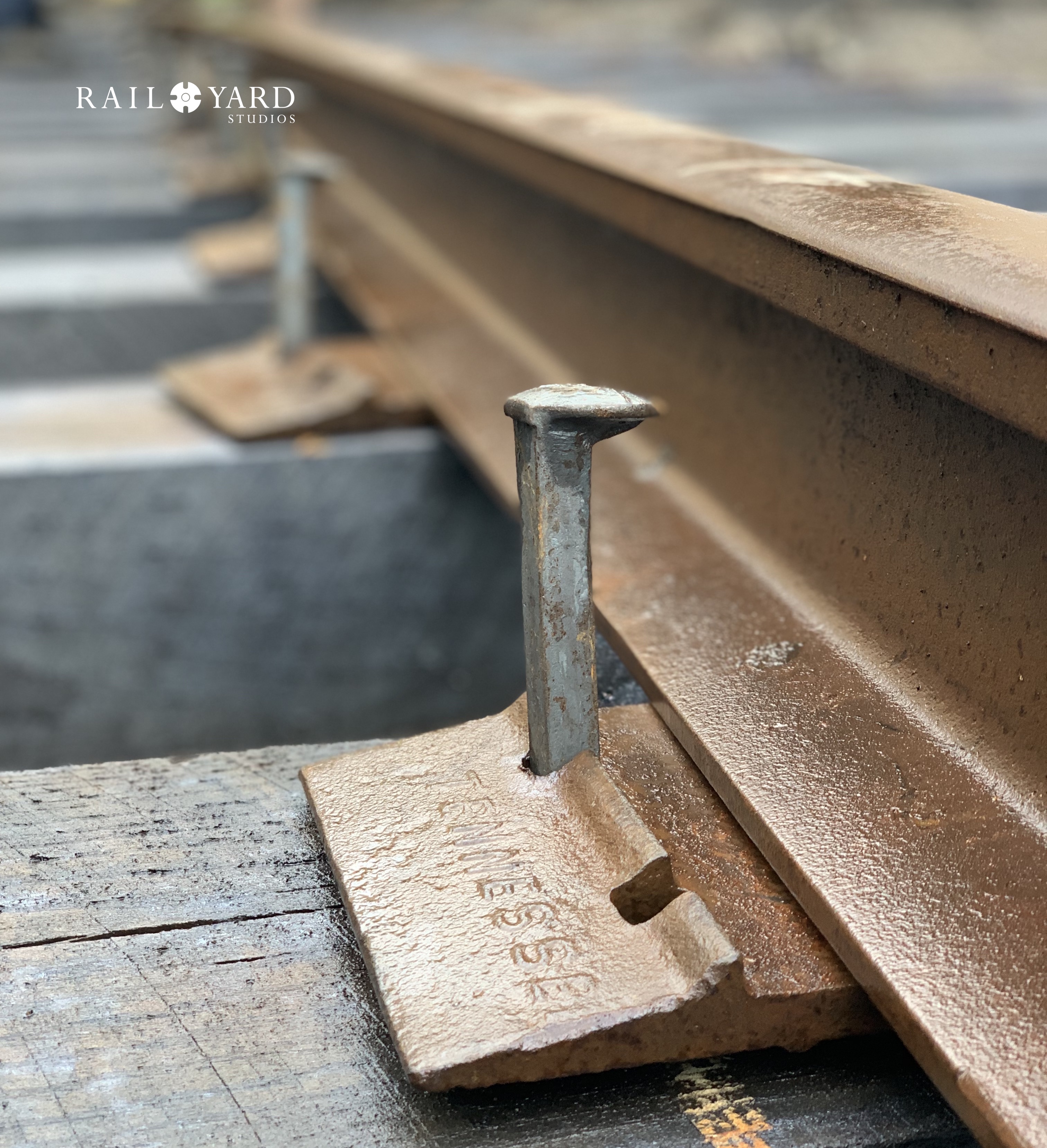 In the growth process of the United States from sleepy homesteader territory to industrialized global power, the builders of this great nation relied heavily upon the railroads to connect and transport resources and raw materials from their sources to their intended destinations.

For the want of a spike, the rail was lost.

For the want of a rail, the train derailed.

For the want of a train, the raw materials were lost.

For the want of raw materials, the building was not built.

For the want of the train, the vehicles had no gas or oil.

For the want of the train, the soldier did not arrive.

For the want of the train, the food did not get to market.

For the want of the train, the medicine shipment never made it to the hospital.

For the want of the train, the power grid was not built.

For the want of the train, you did not make it to work.

For the want of the train, the industry of the city lost dozens of workers.

If you have no railroad, you have no industrial powerhouse urban areas like New York City or Chicago or San Francisco at the size and scope that they are in 2022; and ultimately you have no Industrial Revolution. That means you have no United States as a world superpower. 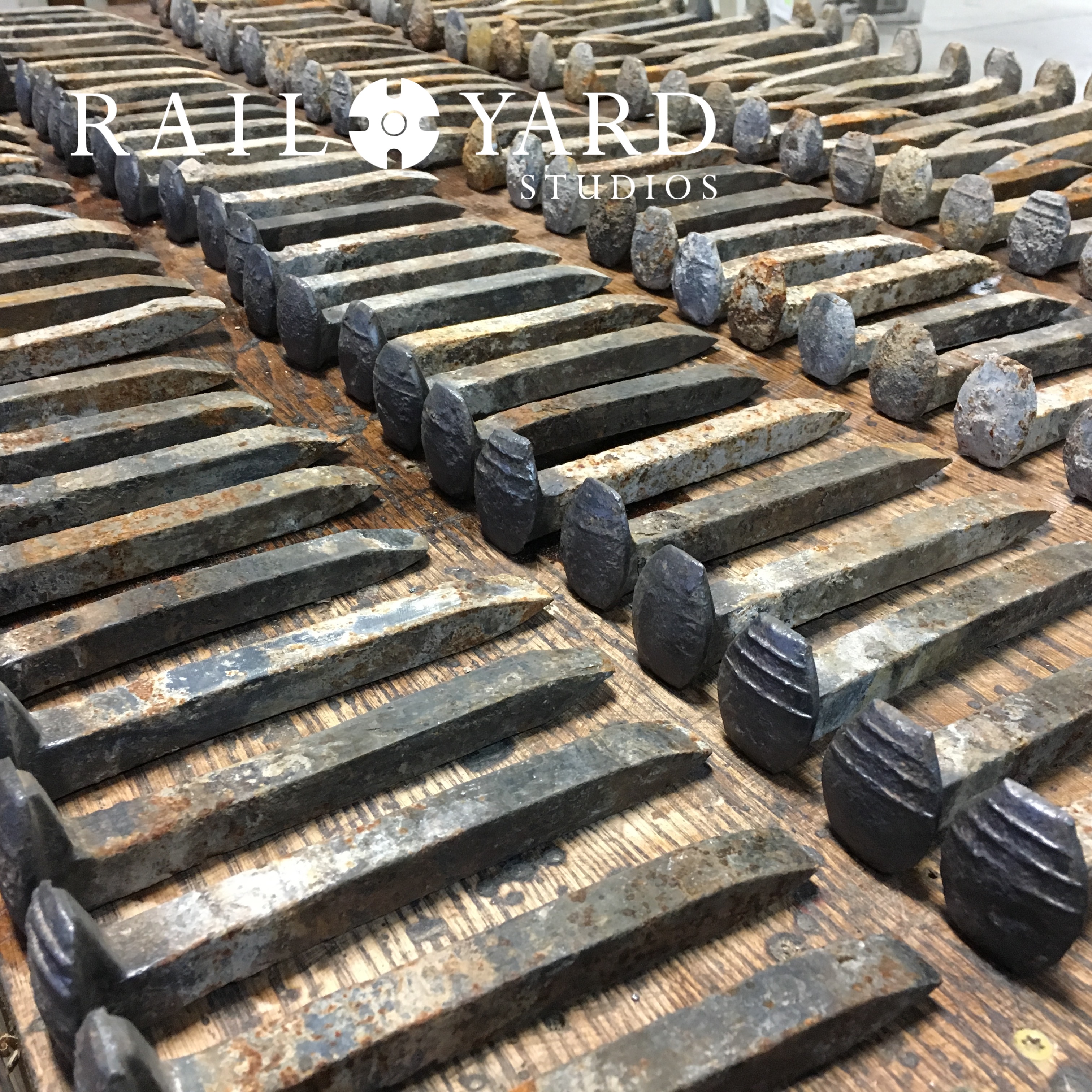 For a glimpse at the variety of rail cars made to sustain the fabric of our country, check out this short visual explanation provided by our friends at Union Pacific.

The spike is the driving force connecting it all together, the linchpin of transportation, commerce and industry.

Just like people connect to their chosen locations through creating a home to set a root down in the territory and the nails connect wooden boards together when building a home, the railroads connected cities and industrial hubs together across this sprawling country.

Wherever men made railroads, some form of a rail spike has always held it all together.

A Little History of the Rail Spike Origins

The first railroad of any form in the U.S. began construction in 1764 for military purposes at the Niagara portage in Lewiston, New York. The earliest wooden rails attached to the wooden crossties by way of nails or pegs through holes in the rail.

By the 18th century came the emergence of iron rails, designed with holes in the rail itself to allow them solid connectivity to a support.

Although 1832 established the first recorded use of the invention of the rail spike, credited to a man named Robert Livingston Stevens, president of the Camden & Amboy Railroad; a man named T. W. Harvey claims the first listed patent of a rail spike on record in (1834). Specification of a patent for an improvement in Nails and Spikes, denominated the Grooved and Flanched Spike. Granted to Thomas W. Harvey of Jamestown, Chataque county, New York, September 16, 1832. 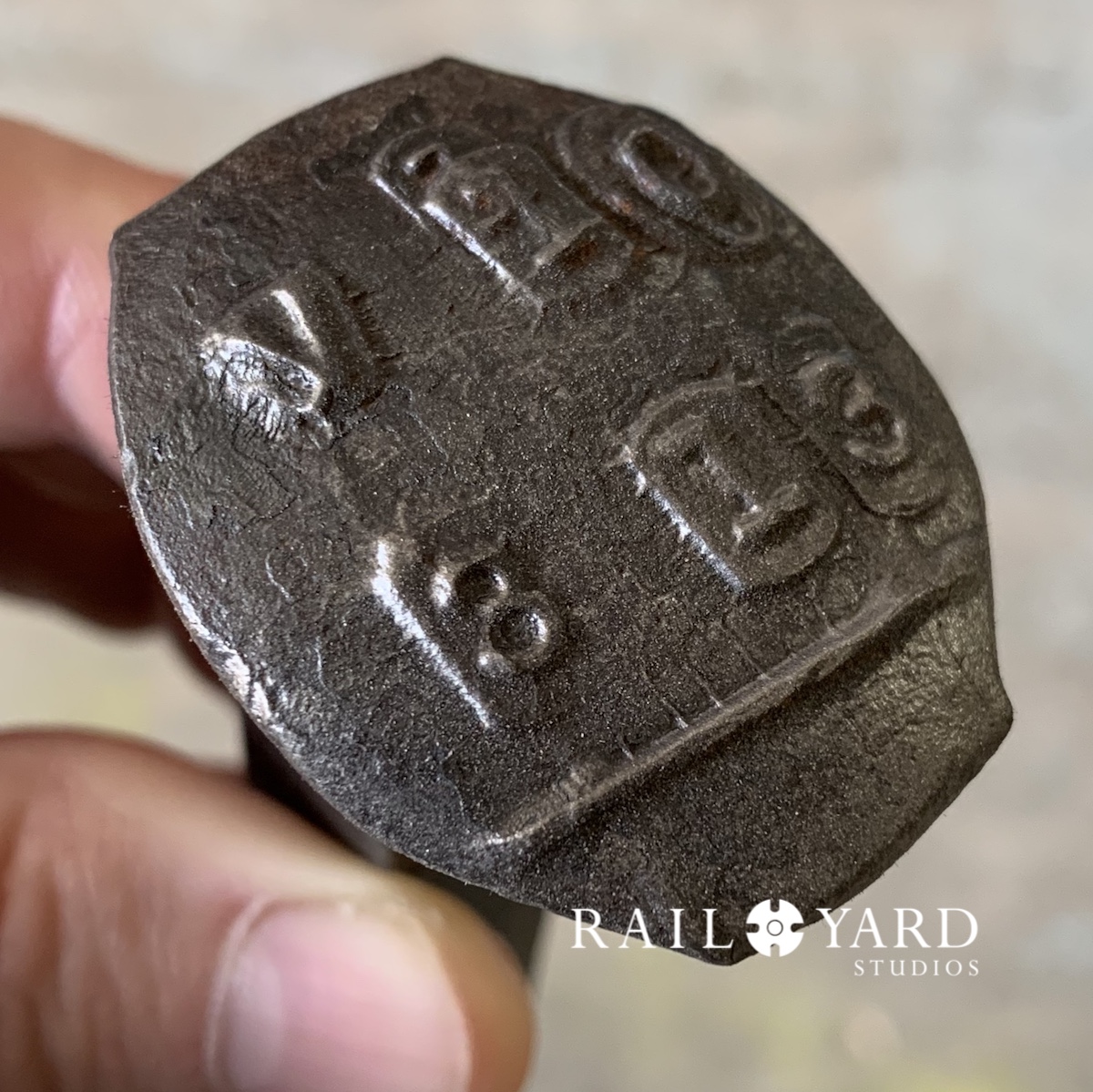 The Franklin Institute of Pennsylvania, in whose Journal it first appeared, displays a copy of this hand-written patent.

Stevens owns the first actual charter for a railroad in the United States in 1815, but surveying and construction on the first U.S. railroad, the Baltimore and Ohio, chartered in 1827, didn't really begin operation until 1830 upon the completion of the first fourteen miles of track.

By the examination of this historical timeline, that leaves a stout 68-year gap from the beginnings of the first US railroad in 1764 to the first use of the spike as a verified invention in 1832. The patent of the spike as an upgraded article registered in the Library of Congress in 1832. Sixty-eight years would comprise more than two full lifetimes for the average working man of that day and age.

The railroad spike as an invention resulted from the state of industrialization in the United States in the early 19th century. English mainline railways of that period used heavy and expensive cast iron chairs to secure T-shaped rails; instead, Stevens added a supporting base to the T-rail which could firmly connect to wooden ties with a simple iron spike through a tie plate. In 1982, the spike still remained the most common rail fastener in North America.

A rail spike (also known as a cut spike or a crampon) is a large nail with an offset head used to secure rails and base plates to railroad ties (sleepers) in the track. Built with a timeless design, rail spikes perfectly hold steel rails fastened to steel plates and wood beams while sustaining the wear and tear of literally hundreds of tons from iron monsters rolling over top of them repeatedly for decades. Common sizes range from 9⁄16 to 5⁄8-inch (14 to 16 mm) square and 51⁄2 to 6 inches (140 to 150 mm) long. 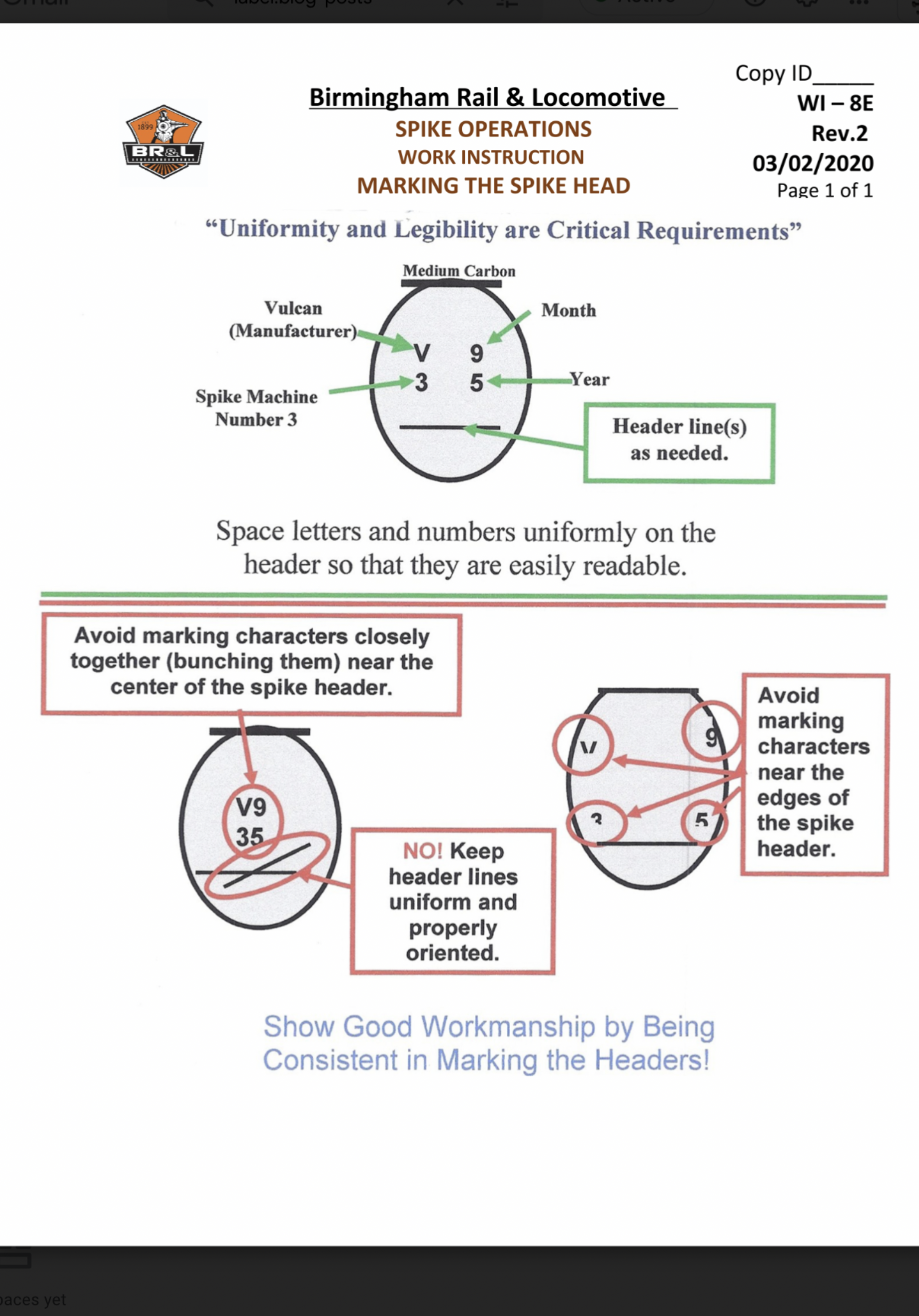 The chisel-shaped design of a rail spike possesses a flat-edge point. Driving the spike with the edge perpendicular to the grain gives greater resistance to loosening. The main function always remains to keep the rail in gauge. Establishing the strongest bond possible never changes as the ultimate goal when attaching tie-plates, whereas when attaching a rail to tie or tie plate the spike does not normally require a strong vertical force, allowing the rail some freedom of movement.

Each spike possesses its individual features like in criminal forensics. The wear from a hard service life, the decay from exposure to the elements and the manner in which the spike was originally driven in and subsequently removed all contribute to crafting a unique story for each and every spike. The constant friction of iron on iron from plate rub, spike rub and rail rub cause for wear and tear throughout the lifespan of a rail spike.

A manufacturing mark on the head of each spike conveys provenance, signaling its source of origin. The markings

frequently get pounded off when driving the spikes or wear down over time from constant exposure to the elements. According to Nick Bousquet of Birmingham Rail, “The markings on the head of a spike may tell the manufacturer, the specific machine that produced it and the date of manufacture. The lines and other markings on the head also provide texture to improve friction as the spikes are driven.” As we know – smooth steel on steel can be very slick and offer little friction.

On smaller scale jobs, we still drive spikes into wooden sleepers by hammering them with a spike maul, though hydraulic tools and machines, commonly called "spikers" (a machine that removes spikes is called a "spike puller") largely replaced this manual work over the years. Pre-boring spike holes or adding end-plates provides another avenue to limit splitting of the wood.

But it’s Just an Iron Nail with a Funny Head. Aren’t All Spikes the Same? 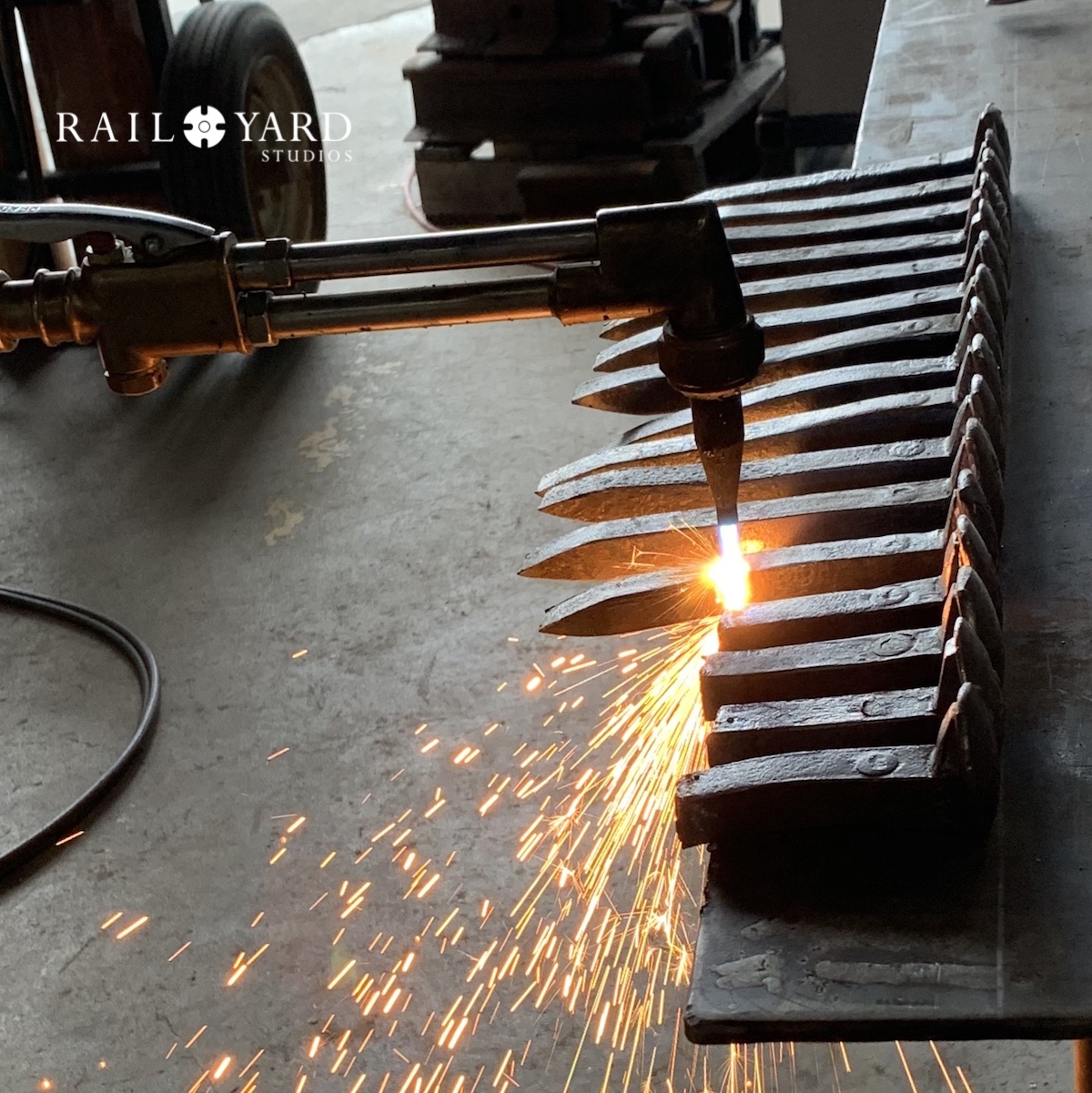 A dog spike functionally equates to a cut spike, also square in horizontal section and of similar dimensions, but has a pointed penetrating end, and the rail (or "plate holding") head has two lugs on either side, giving the impression of a dog's head and aiding spike removal.

Spring spikes or elastic rail spikes most frequently connect with flat-bottomed rail, baseplates and wooden sleepers. The spring spike holds the rail down and prevents tipping and also secures the baseplate to the sleeper.

The Macbeth spike (trade name) is a two-pronged U-shaped staple-like spike bent so that it appears M-shaped when viewed from the side.

For an audio-visual explanation of the cut spikes we use at Rail Yard Studios, check out this video of our founder giving an overview of the functionality of a spike in action on the rail.

That’s all cool and whatnot, but what does it all mean?

A Golden Spike or the Last Spike historically symbolizes the start or completion of an endeavor.

A ceremonial Golden Spike driven by Leland Stanford connected the rails of the First Transcontinental Railroad across the United States. The valuable rail fastening spike represented the merge of the Central Pacific and Union Pacific railroads on May 10, 1869, at Promontory Summit, Utah Territory.

The rail spike has entered American popular consciousness in this manner; the driving of the Golden Spike established a key point in the development of the western seaboard in North America and recognizes a national achievement and demonstration of progress. 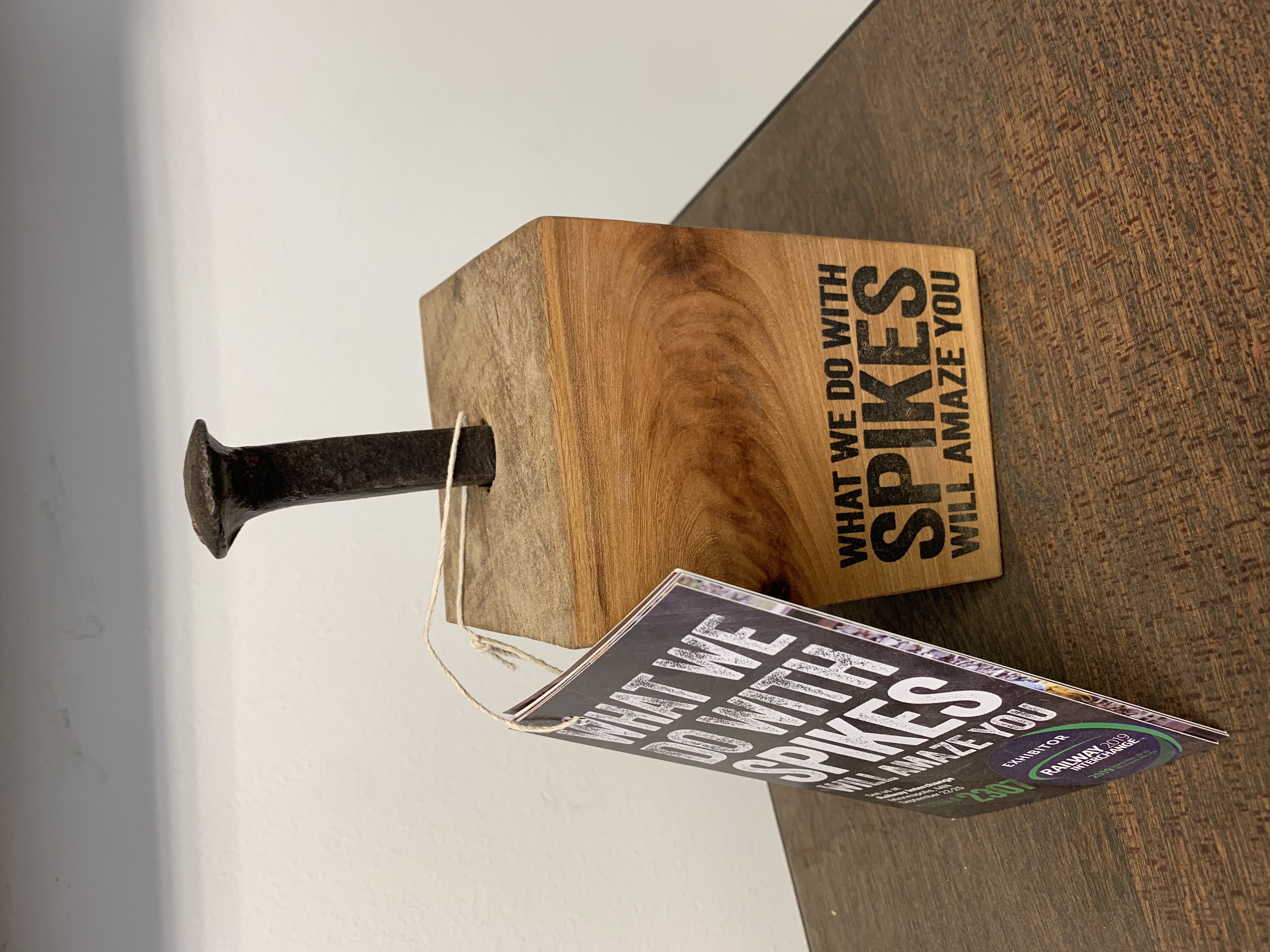 More recently, a Golden Spike marked the completion of the longest transportation tunnel in the world, the Gotthard Base Tunnel, which opened June 1st, 2016. Full rail service began on December 11th, 2016. It has a functional length of 57.09 km (35.5 mi) and boasts the current record as the world's deepest traffic tunnel.

Spikes have even had an impact on the self-image of those professionally mandated with the purpose of driving the spikes home to where they will provide their life of service, powerfully exampled by this blues ballad “Spike Drivin' Blues” by Chris Knight.

Why does that matter to us?

Not only do we have a deep appreciation for all things railroad, but we also share a profound affinity for the history and culture of railroading. We use rail spikes in a variety of ways to connect the foundational wood tie and steel rail pieces together that comprise our custom artisan furniture pieces.

You can see how we utilize the conventional method of tie plates like in our Switchpoint Desk or this Crossover Conversion Ping Pong Conference Table.

Just as we keep our materials and processes as true as possible to pure railroad tradition, so goes our colloquial railroad language with it. And so, to close out any project we finish by proclaiming the oft forgotten railroad statement of completion, “Put a spike in it.”

A golden spike at that.