The railroads should be one of the seven wonders of the world. They’re an architectural and engineering phenomenon that spans the entire country coast to coast. Heck – the entire world if you don’t count the two-thirds of the planet covered in water.

It’s a marvel to watch these railcars weighing as much as 350,000 pounds being strung along down the tracks like massive steel circus elephants with their trunks holding the tail of the one in front of them.

We love seeing those big freight cars rolling down the tracks.

The railroad operates on an immense scale that defies comprehension in terms of the amount of material and goods moved on a daily basis.

To put things in perspective, the Class 1 railroads alone operate over 23,000 locomotives that are integral to mobilizing the fleet of 1.5 million railcars in North America. Speaking of railcars, you can find us at the Railway Supply Institute Expo in Fort Worth, Texas on October 11-13, 2022.

Let’s compare the US Railroad with the current Seven Wonders of the Modern World. 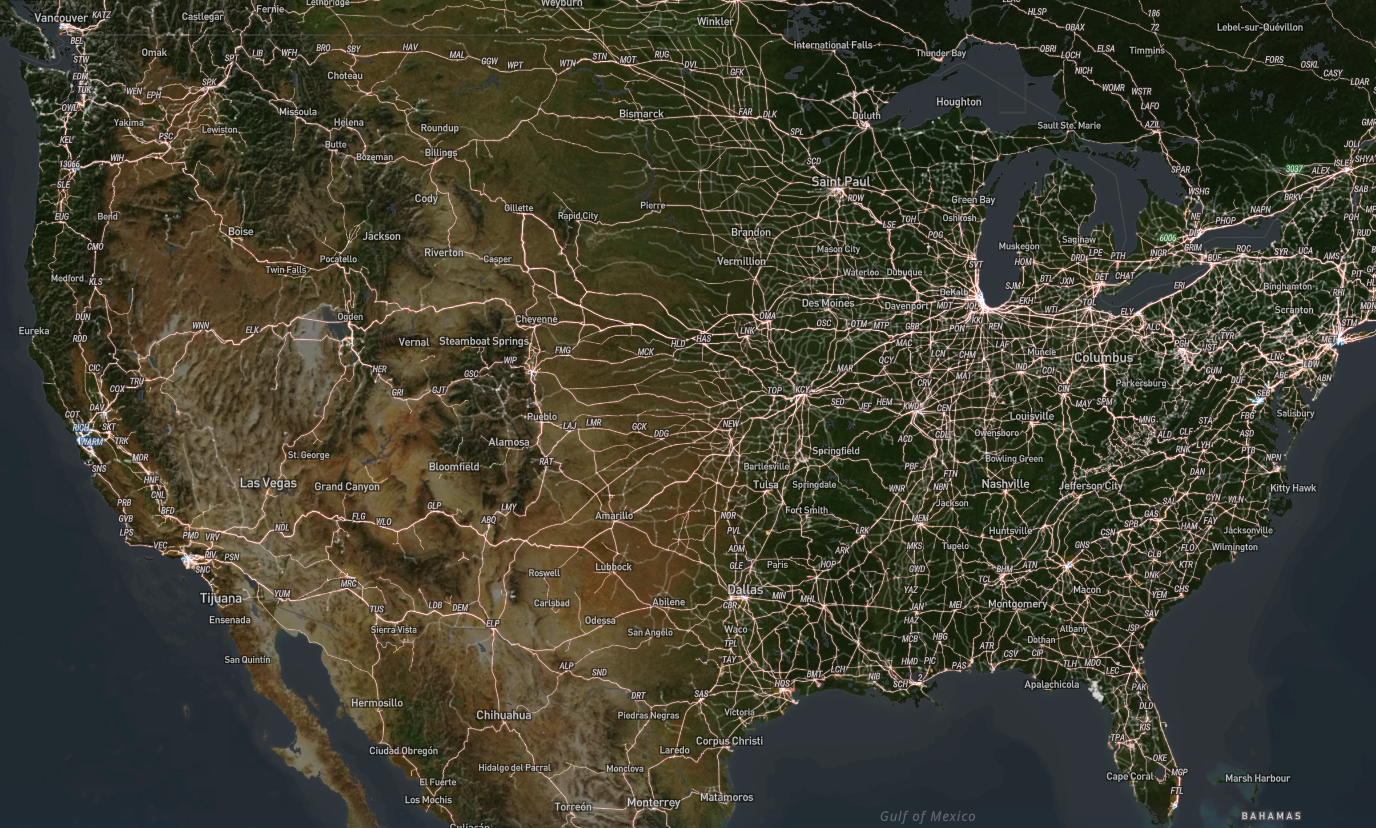 The Great Wall of China

The Great Wall of China is impressive. Officially listed at 5,500 miles, there is a claim by a Chinese study that inflates the length to 13,170. It’s visible from the moon, or so the legend goes, but we’ve never been there, so we can neither confirm nor deny that claim. It took 2,300 years and nine dynasties to complete it.

At over 140,000 miles today (that’s an uninflated number for those drawing comparisons), the US railroad exceeds the length of the great wall by over tenfold when compared to the inflated figure. That shifts to 25-fold when compared with the official figure for the Great Wall. The railroad has been built in a little over a century under a single dynasty.

This one is not even close. 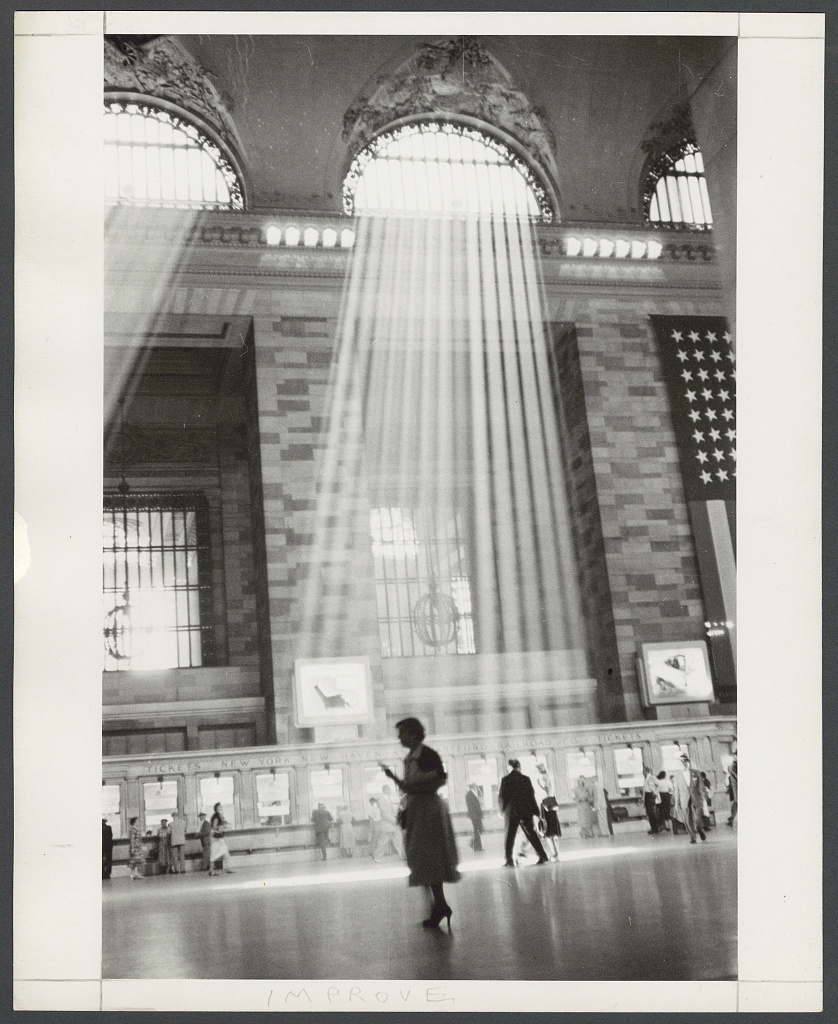 Gorgeous structure – simply stunning! The Taj Mahal represents the crown jewel of Indian architecture. A massive mausoleum built by a king and a queen, it has special significance, and Wow what a photo op!

Architectural Digest called out the “Most Beautiful Train Stations in the World.”

Of course, the amazing Grand Central Station in New York made the list.

On top of that, four…yes FOUR Union Stations across the USA made their list.

The Union Stations in Los Angeles, Washington, D.C., Denver, Colorado and Cincinnati, Ohio all made the list. 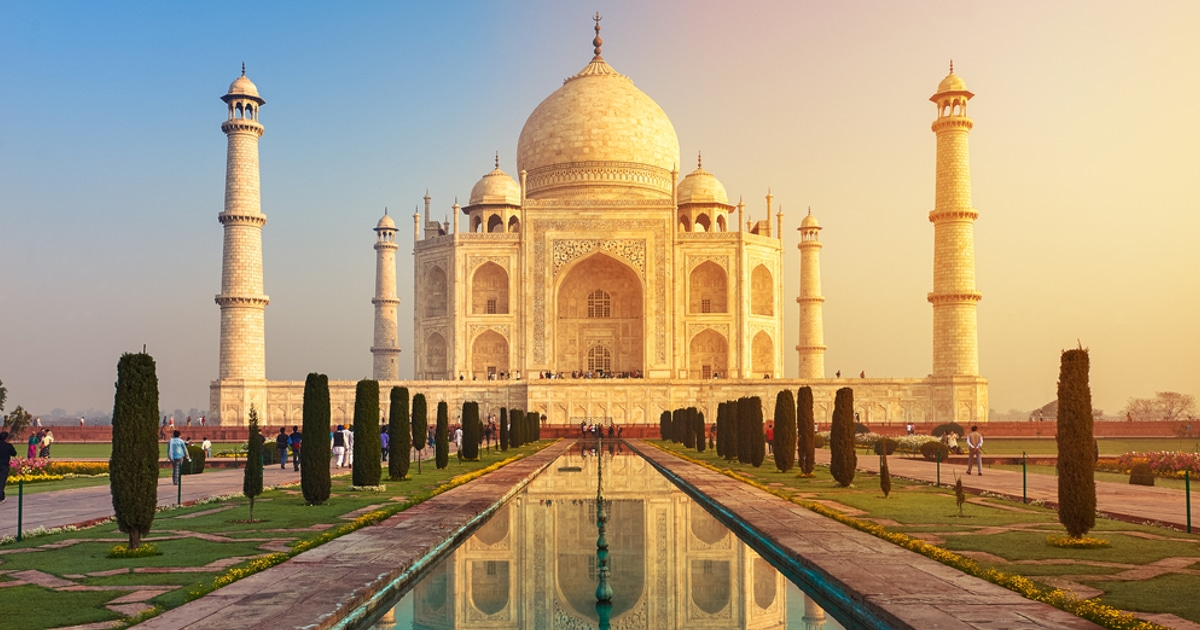 And while the beautiful white marble of the Taj Mahal makes it stand out, the white granite mined in Bethel Vermont used in the construction of the Washington, D.C. Union Station sets it apart as well.

Since the structures are all connected via the rail lines, if they count as a collection of structures, we’re going to give the railroad a slight edge for quantity over quality on this one, but it’s a tight one. 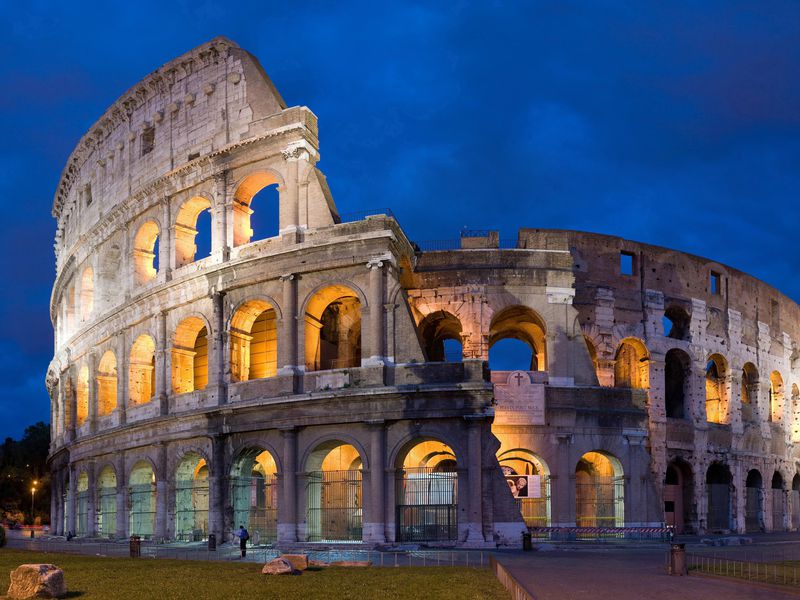 We love Italy. We love Rome. Italy loves its trains – they can take you almost anywhere in the country. And the Italian countryside is as phenomenal a view from the train as its cities are.

The formula for the concrete used in the Colosseum remains a bit of a mystery. It has withstood the ravages of time better than modern concrete and serves a strong sense of national pride for the Italians.

We could refer back to the list of “Most Beautiful Train Stations” here, but let’s talk roundhouses since we’re looking at the Colosseum.

The Roundhouse at the B&O Museum in Baltimore, Maryland represents the best in terms of museum and preservation when it comes to the railroads. There are countless other gorgeous roundhouses in Ohio, Pennsylvania and other places around the country.

We’re decidedly biased, but still, we’re going to have to give this one to the existing Modern Wonder of the world 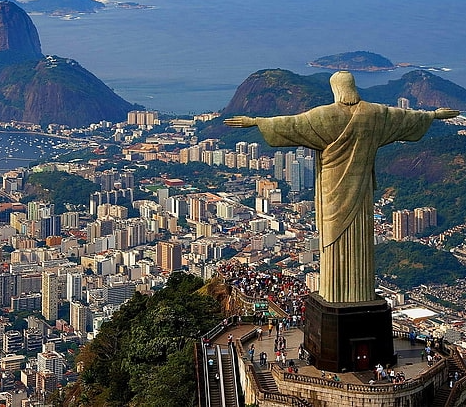 Religion and trains – a couple of things that come first to mind when talking about Rio DeJaniero. The outstretched arms of the stone figure that surveys the entire metropolis sees all and sets the tone for the city filled with railway lines that are known for the crazy way people sometimes ride along on the passenger trains.

As far as the railroads go, we offer up the figure of “John Henry and the Coming of the Railroad” at New River Gorge. John Henry stands at the entrance of the Big Bend Tunnel in West Virginia. Truly a magnificent wooded mountain area, it's a landscape of beauty similar to the Brazilian capital city with high peaks and low valleys.

Among railroaders, the legend of John Henry stands tall. But when it comes to the “Coming of the Railroad” and the “Coming of Christ” and the longevity of one of these guy’s story over the other, there’s a pretty clear winner.

At the risk of angering the big guy, we’ll hand this one to the folks in Rio.

Sitting at 7,972 feet above sea level, the Incan Citadel represents not only an impressive height but also an impressive engineering accomplishment in how it was built with dry-stone walls that use no mortar. If you’ve ever tried to breath at that sort of altitude, then you know executing that sort of architectural work without the benefit of modern machinery is astounding.

We railroad has a significant advantage in terms of the elevation attained with the Cumbres Pass on the Cumbres & Toltec Scenic Railroad reaching an altitude of 10,015 feet giving it a clear win in terms of height. 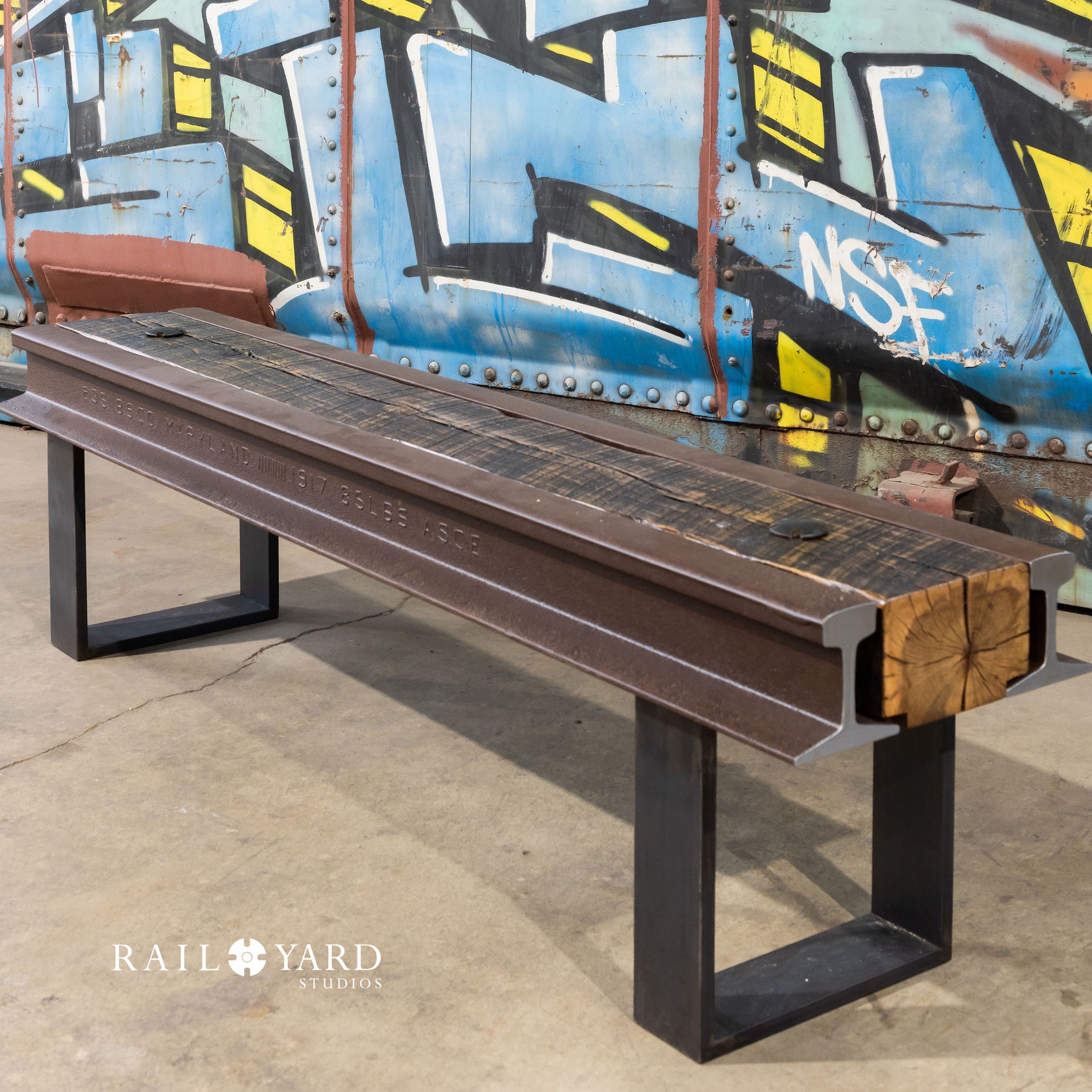 Speaking of elevation, it's always nice to find a bench when hiking to those heights, and our Elevated Bench seemed like a nature piece to fit into the conversation here.

While we’d love to award the winner of this round based solely on heights attained, the reason for the Manchu Picchu inclusion on the list of Modern Wonders of the World is more than just attaining a height, it’s about the construction at that level.

The architecture of this ancient city still inspires awe today. Carved directly into the stone walls, the site in Jordan reportedly served as the home to 30,000 involved in trade, like spices.

Creating new towns? Seriously, that’s a claim to fame to be a Wonder of the Modern World?!

The railroad has got that in spades. Among the cities that can trace some of their massive growth to the railroads, we have Atlanta, Chicago, Baltimore, St. Louis, New York, Nashville, Pittsburgh, Salt Lake City and Las Vegas…and that’ just for starters!

The list of smaller towns created by the railroad goes well beyond this. Suppliers to the railroad even created towns like Pullman, Illinois with 1,000 homes built by industrialist George Pullman for the manufacturing of his famous railcars. 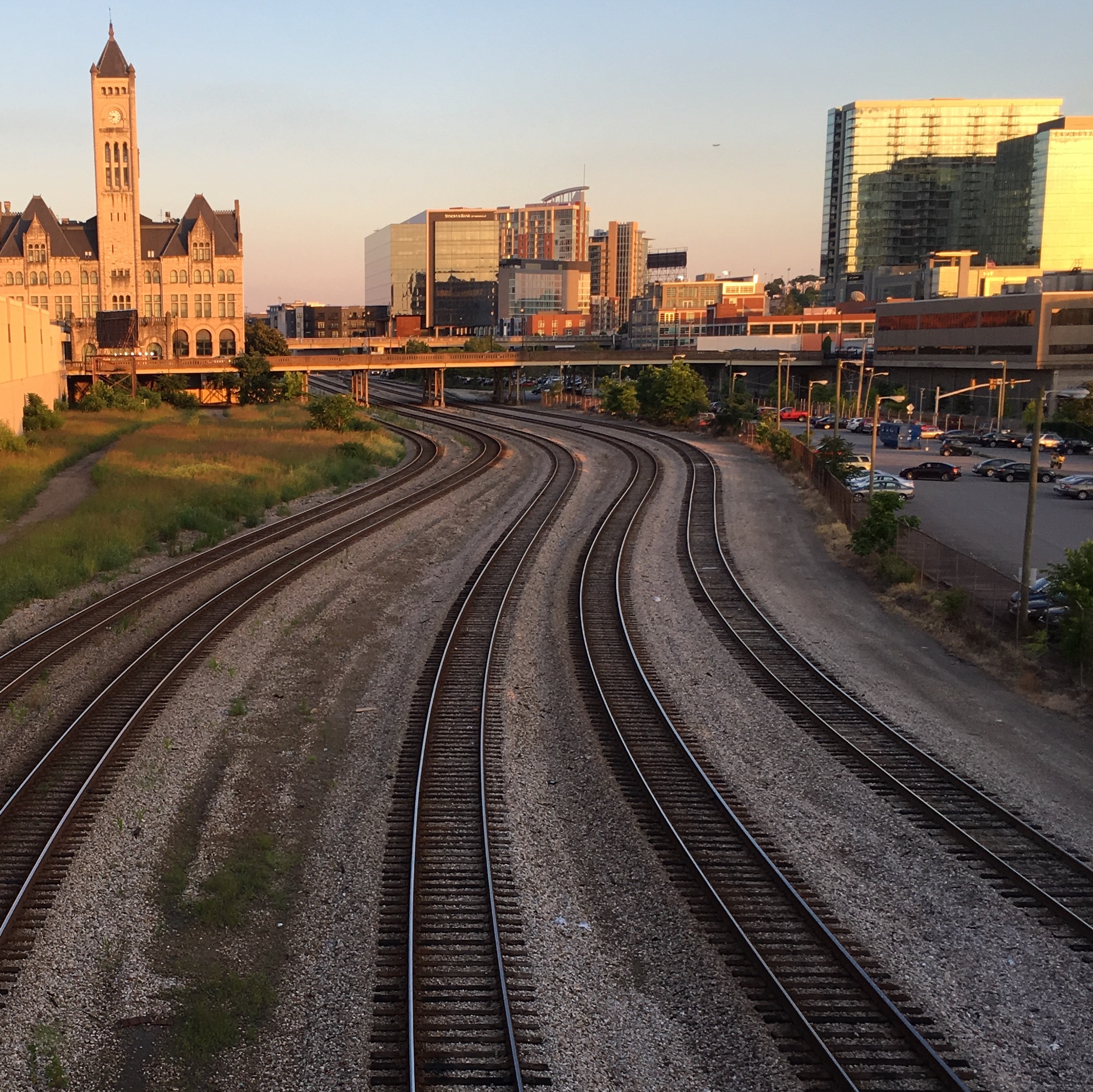 The Mayan City on the Yucatan Peninsula features 365 steps – the number of days in the solar year. During the spring and fall equinoxes, a serpentine shaped shadow descends the stairs to meet with the head of a feathered serpent.

In front of that, there was a ritual ballgame played at the foot of the structure. Actually one massive field – part of a collection of thirteen fields!

Combining sports AND a penchant for incorporating symbolism into the architecture makes this one of the Seven Modern Wonders truly impressive!

But before we go awarding the win to the Mayans, let’s look at what the railroad brings to the table.

Railroads snake through the landscape of the country every day, all day for 140,000 miles - a fact we’ve already mentioned. The railroads move a serpentine collection of railcars headed by locomotives and many of ours are two, three and four headed serpentine figures stretching well over a mile long!

Try and dismiss that from your nightmares.

Now consider this. The railroads can deliver you to a whole host of different ballgames throughout the country.

NFL, MLB, NHL, MLS – pick your sport and there is a train that goes to a stadium.

Not all of them mind you, but here’s a sample of NFL stadiums with some sort of railway access:

It’s all tied up.

So the final call is yours – what say you?

Does the US Railroad qualify to be one of the Seven Modern Wonders of the World?

If so, which one would you displace from the list and award it to the US Railroads?

Or do we simply add an eighth wonder to the list?